Over the past few years, the Minnesota Twins have had their fair share of success mentoring and developing their prospects in such a way that has garnered national attention. For instance, the emergence of Alex Kirilloff and Trevor Larnach gave the Twins a promising future that, while it has yet to be fulfilled, is something with immense encouragement. The pop-up prospect status of Jose Miranda has been a surprising one, as he continues to try and redevelop his 2021 swagger. There’s also the usefulness of pitchers Bailey Ober, Griffin Jax and Josh Winder, who have been able to come up to the Major Leagues and get the job done at a moderately valuable ability. And even though he remains an injured enigma, the potential of Royce Lewis seems to be coming to fruition in the near future. Which begs the question: who is next?

Heading into the 2022 season, if I had to pick one name, I thought it would have been Jordan Balazovic, who was seemingly on the cusp of raising his floor and his ceiling. While his year hasn’t gone nearly as planned, it was someone else ranked a little lower who has broken out and seems poised and ready to be garnering that national attention that the Twins keep getting. That man is Spencer Steer.

Drafted in the third round of the 2019 draft and 90th overall out of Oregon, the versatile infielder immediately made an impact by doing what he does best: putting the bat on the ball and making good contact. He finished the year with impressive numbers, specifically in A-Ball, where his low strikeout rate (13.9%) and moderate walk rate (9.5%) showed that he had good patience at the plate while being able to recognize the pitches he was being thrown.

Still, while missing all of 2020 was a detriment to most prospects, Steer took it in stride, by constantly training at home and working on his swing. Though not nearly the same as being instructed in person, Steer remained optimistic that his time would come and did what he had to do to maintain his 2019 gains. When he entered the 2020 instructional camp, coaches praised his work ethic and ability to listen to the advice that was given. He worked on a few tweaks and suddenly there was more power in his swing. 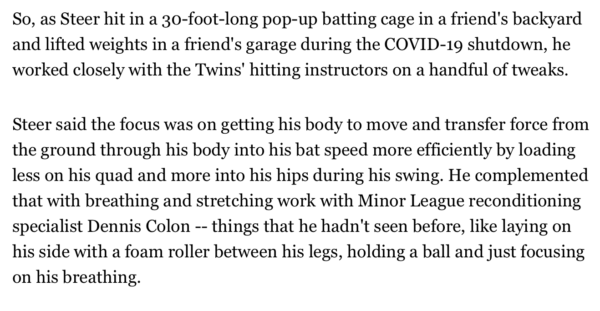 The final results were incredible, as he finished the 2021 season with 24 home runs and eight stolen bases while maintaining a solid .254 batting average over two levels of baseball. And while he did sacrifice some of his batting average for the power he was supplanting, he still walked a fair amount, finishing with a .348 OBP for the year.

Spencer Steer (@spenc__er) is a name #MNtwins fans will want to keep track of.

He’s been REALLY good in just his first full season of pro ball, with the past 10 games suiting up for @WindSurgeICT pic.twitter.com/QN7Lmo5EUI

This season, he seems to be more comfortable at the plate, as he is not only utilizing the adjustments that he made for additional power but also tapping into his past abilities to make contact when the timing is right for it to happen. Essentially, it seems that he’s more aware of when to tap into his power and when to take what’s being given to him and make the most of it. His numbers to start the year have been impressive, to say the least. Over his first 35 games in Double-A Ball, he not only significantly lowered his strikeout rate and raised his walk rate, but he also reduced the number of groundballs off of his bat and heightened his line drive rate. Due to his impressive start there, he was subsequently promoted to Triple-A Ball and has hit the ground running with some power, speed, and patience at the plate. It remains to be seen if this can be maintained, but his small sampled numbers are very impressive with St. Paul, and a promotion to the Twins could be in the works.

Spencer Steer is hotter than the sun this season. Three-run walk off bomb for Wichita tonight in the 11th inning. Enjoy him while you can, Surge fans pic.twitter.com/4y6X7ZnvLF

None of the aforementioned hitters mentioned above have anything set in stone as being the guy for their respective position. Jose Miranda has been scuffling all season and is striking out at an alarming rate. Alex Kirilloff has been prone to injuries before and it’s unsure if and when he can return to the way he was. Trevor Larnach has shown some improvements, but he has his issues to work out. Steer could very well be the next man up, should the opportunity arise. While the long-range plans for the team competing in 2022 for the infield likely include Jorge Polanco, Carlos Correa and Gio Urshela, anything and everything should be in play here. There’s still a lot of baseball to be played and Steer still needs to maintain this sort of ascension. However, if his adaptability throughout various promotions continues, we could see a very successful run with the Twins at some point his season or next, despite who else may be in his way.