Yes folks, as the MLB offseason progresses, one thing looks to be more and more certain: Alex Kirilloff should be a fixture in the Minnesota Twins lineup as soon as Opening Day in 2021 (whenever that is). This offseason, the Twins didn’t re-sign designated hitter Nelson Cruz and placed Eddie Rosario on outright waivers, suggesting a possible end to their tenure in Minnesota, and opening the door for one of the most heralded prospects in all of baseball to take over. And while a reunion with those aforementioned players is possible, or for the Twins to trade for or sign a free agent to play in the outfield, right now, the overwhelming favorite for me to take over somewhere in that lineup is Alex Kirilloff. Despite the fact that he missed an entire year of minor league development due to the Coronavirus, he still stands tall as one of baseball’s best prospects and a viable replacement. Here’s a timeline of his success and rise to the Majors.

Drafted in the first round of the 2016 MLB Draft out of high school, Kirilloff was highly touted for his raw power and his strong arm in the outfield. With an already solid farm system in place, Kirilloff was immediately slotted near the top of their list, as his pedigree for success was seemingly set in place. He made an immediate impact in Rookie Ball as he finished with a .306/.341/.454/.794 line, while slugging seven home runs over 200+ plate appearances.

In an unfortunate turn for the worse, Kirilloff was forced to have Tommy John Surgery on his left elbow and would miss the entire season due to rehab. He would miss an entire year of development, delaying his pro career.

Coming back strong after his injury, Kirilloff didn’t miss a beat this year in both A and A+ Ball, batting for a combined .348/.392/.578/.970 line with 20 home runs, over 100 runs batted in and four stolen bases. In fact, while playing for the Miracle (A+), he had just one three game stretch where he went hitless, and was guided by his father’s mantra of using vision and timing to make contact. It’s a unique way of approaching every at bat, but something that keeps him locked in to the pitcher’s motions.

First-hand scouting report on #MNTwins prospect Alex Kirilloff from his last days at Low-A, by @nathangraham3.

Filled with praise. “Profiles as a future first-division power-hitting outfielder.”

If nothing else, go watch the video of Kirilloff hitting.https://t.co/VCV6s0PQso pic.twitter.com/2gWF1buOTr

His fourth year as a Twins’ professional was derailed twice with injury, as he started the year on the IL with a wrist injury, and then later was back on it with an undisclosed injury. Despite this, he still finished with a .283/.343/.413/.756 line with nine home runs and seven stolen bases over 400+ plate appearances. He was my number 2 ranked prospect in my Top 50 the following January and the consensus number 18 prospect later that year by the entire Prospects1500 staff. Rumors had it that he was an option to be groomed for a first baseman transfer from the outfield in an attempt to keep the major league roster intact and give Kirilloff another eligible position to play. The table was set for an appearance the following season with the big league club.

What’s encouraging about his profile here is that he doesn’t strikeout a ton and makes good contact. He spreads the ball all over the field with a high average. His K% – BB% rate translates to about a slightly average profile in the MLB, but expect a slight adjustment dip in production since pitching is far superior. Personally, I’d like for his walk rate to improve a bit more, but that could be nitpicking, as I don’t know how this will translate when he does get to face major league pitching. But overall, he looks to be the (almost) complete package.

We don’t have much to go by here, but Kirilloff had a pretty good Spring Training. He finished with a .429/.455/.810 line with two home runs, four runs batted. He struck out three times and walked once. Again, it’s not much to go by, but it’s something.

During the Summer Camp, he was mashing against any and all competition within the organization. While he didn’t get the opportunity to take his talents to AAA Rochester, he did see a lot of in-house pitching coming from an organization that knows how to draft pitchers. Scouts and staff within the Twins’ organization did what they could to keep players motivated with bragging rights on the line and the use of incentives, such as gift cards. There are rumors of him batting .500 with seven home runs and a plethora of doubles, but nobody knows for sure. In a story published by The Athletic’s Dan Hayes, here’s a tall tale from the eyes of Twins’ minor league hitting coordinator Donegal Fergus about a mini stretch during Kirilloff’s summer experience: 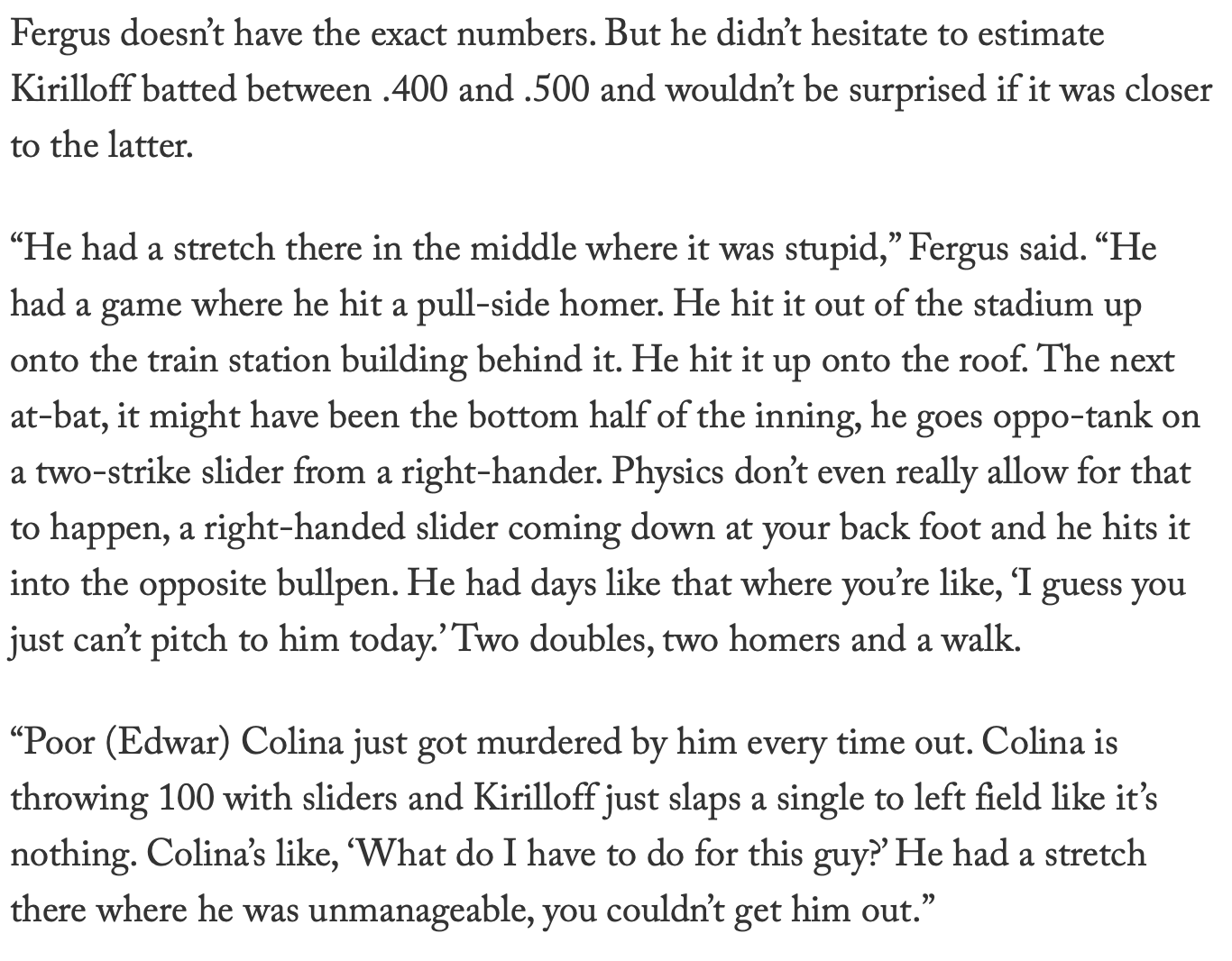 And, while there are many other reasons to counter this due to the validity of the quality of pitches he saw (many pitchers were afraid to injure their teammates with inside pitches), the fact remains that this is all we have for 2020 and he passed the test.

“Is there a better swing in the organization than that swing?”

Alex Kirilloff went opposite field with his sweet swing today in the #MNTwins‘ intrasquad game.

Here’s our full scouting report on the @Twins‘ No. 2 prospect: https://t.co/0EDnQMwq6P pic.twitter.com/wgbIHcgv18

Later in the year, he got the call up to the major leagues and was placed on hitter playoff roster. He impressed many within the organization with his desire to learn, his willingness to adapt and his vision at the plate. In fact, manager Baldelli spoke about his conversation with Kirilloff, saying:

Baldelli said, “Chatted with him for a little while and also told him that he was going to make our playoff roster. The tone on the other end of the line did not change a ton. I think he said, ‘Oh yeah. That’s awesome.’ And that was essentially it. That’s exactly what I expected to get from him. If I had gotten anything different from him, then I would have been concerned. But that’s Alex Kirilloff, a really, really talented young player, and a guy we’re going to see out there. I can see getting him into these games and helping us win.”

He started their elimination game (in a loss), but made an impression with the bat and the glove.

The Steamer projections listed above for Kirilloff give him the bulk of games played this year for the Twins. They also project him to have 16 home runs and seven steals, which puts him in line to be a 20/10 player in the near future. That’s a pretty generous stat line for his rookie season, but it shows a lot of promise. Right now, Jake Cave is set to start in left field and Miguel Sano is also their projected first baseman. Both have limitations in their game and may not be a long term solution. Roster Resource currently sits Kirilloff as the team’s designated hitter, but if the rumors from the past are to be believed, additional at bats could be available there for some future positional grooming. Some say that he has the ability for plus power as well, so 20 could be on the low side when projecting his true potential. I don’t think that 25 home runs is out of the question at all in the next couple of years.

Heading into the new season there currently looks to be an opening in the lineup for an outfielder. As of right now, many are thinking that Kirilloff has the inside track to get everyday at bats. He definitely has the support of management as well as the talent to make an impact. He makes good and consistent contact with the bat, he spreads the ball all over the field and he’s not afraid to wait for the right pitch. Maybe his below average walk rate in AA isn’t a problem after all. Maybe he is the result of some unique teaching from his father, and actually sees the ball quite well at a young age. Or maybe I’m a bit biased in that assumption since I’m incredibly high on the kid.

One thing is for certain, he doesn’t get rattled and he doesn’t let his nerves or excitement show. He’s stoic and in the zone. He’s calm, yet fierce. He’s everything you’d want in a veteran, packaged into a young 23 year old kid. That said, this will be the toughest phase of his career. This will be the best pitching he’ll ever encounter, and how he learns and adapts will be telling of how far he can go. The opportunity is there for the taking. There’s the open spot that Twins fans have been clamoring for. Can he take the bull by the horn? My bet is yes, but it may not be in 2021 when we see him really grasp onto the chance he’s being given.