“I’m very confident. We have a great group of doctors that we talk to and our medical staff is top-notch, probably the best in the league. We have a great gameplan. I feel like I’m going to have a healthy, successful offseason and come into next spring training ready to rock.”

That was Michael Brantley, back in October.

Since then, Brantley underwent surgery to repair a torn labrum, made an appearance in Spring Training, disappeared, started 2016 on the DL with “no such thing as a target [return] date,” played 11 games from late April to early May, took some rest, went back on the DL, was given anti-inflammatory injections, was given a cortisone shot, started a rehab assignment, went back in for surgery, did some simulated hitting, went back in for more surgery, and is now taking dry swings.

“The next step would be to hit a ball off a tee. But there is no timetable for that step.” –  The News-Herald, Cleveland

Can we stop living in the delusion that Michael Brantley has a likely chance of being a regular contributor in 2017? There’s some serious work the Indians have to figure out in his absence.

Without Michael Brantley, the Indians don’t have an outfielder.

Sure, the Indians have 5 people currently on the roster who can play outfield, but none of them can be counted on to actually stay there, day after day.

Tyler Naquin doesn’t play against righties and is due for serious regression, particularly in the power department.

Brandon Guyer doesn’t play against righties and his only special skill is getting hit by pitches.

Abraham Almonte was suspended for 80 games last year due to PED’s, and can’t hit righties nor lefties very well.

Let’s try to set the Indians lineup with what we’ve got.

Sure, Naquin and Guyer could stop being sheltered from spooky scary right handed pitching that they can’t hit, and Almonte could go out there and have consistently meh performances. But is that really what a team coming off a World Series loss needs to get them back to November ball?

Is Bradley Zimmer the solution?

Indians fans are anxiously awaiting the arrival of Brad Zimmer, a highly lauded CF prospect who will certainly be on the major league club this year. Though one would expect Zimmer to be held in the minors until we’re through with all of that Super 2 nonsense, the Indians have shown (with Naquin) that they’re not afraid of letting a valuable prospect start the year in the bigs.

We talked about Zimmer on our list of Top 50 Indians Prospects for 2017.

Let’s say Zimmer makes the team out of Spring Training. What then? Here are Zimmer’s splits between AA and AAA last year:

So, another body who can’t play more than half the time. At least now we’re up to:

Arguably a more important piece to this Indians OF puzzle is prospect Yandy Diaz, whom we also covered on our Top 50 list. Here are his splits from last year:

Last year, Diaz made starts (in order of GS) at 3B, RF, LF, 2B, and even spent two innings in center. He is the perfect piece to this Indians game of musical chairs, as he can fill in the gap at 3B while Ramirez heads to the outfield, and can also be counted on to head out there himself.

With the amount of dancing the OF lineup has to do, day in and day out, Yandy Diaz could play a full season without playing the same position in back-to-back games. Diaz makes excellent contact, has a great eye, and has a knack for getting on base. He can play anywhere — and do it well — while being a well above average 7-9 hole hitter.

Bradley Zimmer may have the popularity going into this season, but in 2017, Yandy Diaz’s ability to consistently hit well and play multiple positions will deliver much more value to the Indians as a whole than Zimmer will sharing the CF stage with Naquin.

The Yankees have agreed to ship out four prospects to the Pirates in order to acquire SP Jameson Taillon. Find information about the four minor leaguers in our Yankees Top 50 (Miguel Yagure, Roansy Contreras, Maikol Escotto, Canaan Smith). 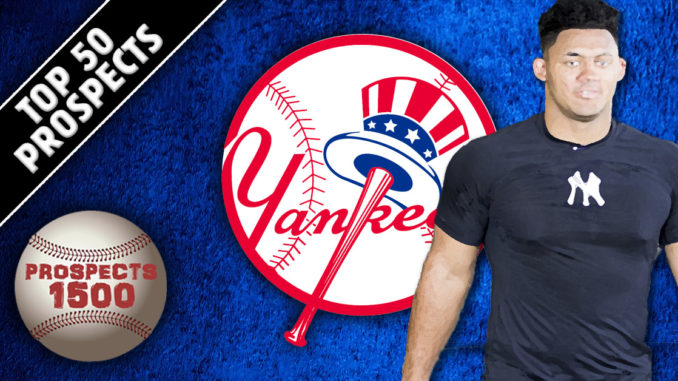